Received something special. A drawing of Rüppell's Vulture (Gyps rueppellii) made by Phil Jones. This bird has been one of the highlights of a Guided day tour into the
Alentejo in late July this year I made with two of Phil's friends (details here). Knowing the area himself from a Tour we did together for Little Bustards, Black-bellied Sandgrouse, Black-winged Kite and others in 2009, Phil draw this wonderful scetch for his friends, which they kindly shared with me. 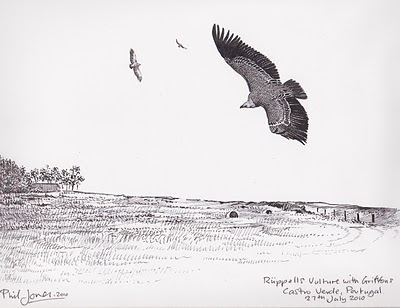 The species by the way, is now seen every autumn in the cape area around Sagres, when single immatures are observed in big flocks of Griffon Vultures that pass through the cape area during October and November. Perhaps already during the bird-festival on the 1st-3rd ...
Posted by Georg at 11:36 AM No comments: 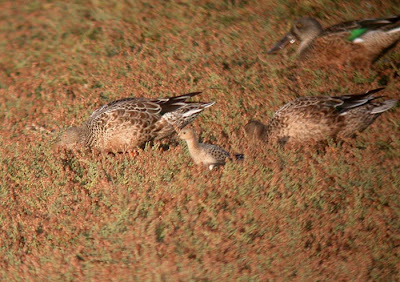 Lagoa Salgados in the west-Algarve is one of the best places to find a wader-rarity here and did not fail us at a visit last week (16-09-2010) when we watched a juvenile Buff-breasted Sandpiper (Tryngites subruficollis) feeding in the low salt-vegetation (Salcicornia) next to the lagoon at the end of the day.
After a while we met Rui Eufrasia, vigilant at the lagoon and learned that the bird had been seen in the morning already but not been reported. Interesting, that there has been a juvenile BBSP at the same spot, last September as well (see photos here.) This years bird was still present the following day, but has not been seen on the 20th and 21st of September anymore. I got some rather poor (low light) digiscoping shots... Several Ind. have been found in Spain this month, too, by the way.
An interesting factsheet about the species (by birdlife) is here. 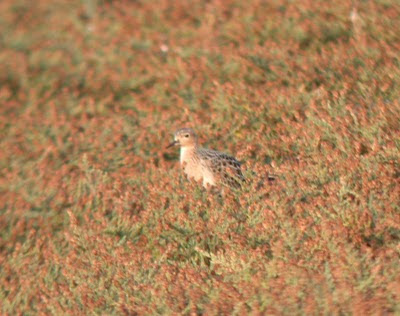 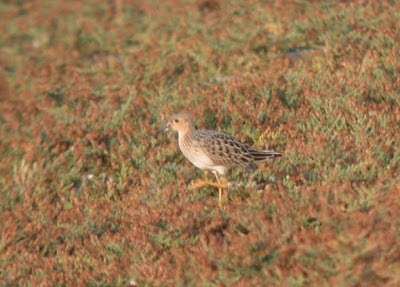 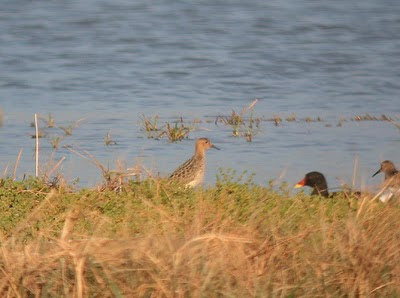 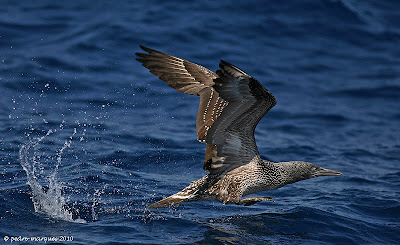 
Portimão in the West-Algarve has been the starting-point for another Pelagic boat-trip organized - this time together with the company Ecoceanus. Sunday morning, 12th of September 2010, a group of 10 enthusiastic "bird-people" plus 2 people from Ecoceanus met at the marina and at about a quarter to eight we were heading out for about 15 miles straight southwards towards a deep sea-canyon where the marine life is special, because food-rich currents attract a lot of fishes, marine mammals and also marine birds... The 11 m's catamaran is a comfortable boat, which is stable, glides low above the water and offers quite some space to choose and change a place. It has a motor, but sails faster than it drives, when this is necessary. It has been a sunny day with some clouds and a breeze, that caused some waves, but all in all we had very good conditions. Soon the first "Cagarras"/ Cory's Shearwater (Calonectris diomedea) crossed in front of the boat, gliding in their typical relaxed manner with hanging wings almost touching the surface of the sea and Northern Gannets (Morus bassanus) flew parallel to the boat, were flushed by us if they had been swimming, or crossed high over on the way to their fishing-grounds further out. Single Balearic Shearwaters (Puffinus mauretanicus) or small groups of three or four of them also passed by, all heading east.
A much lighter, contrasting and less-bellied bird going west was a Yelkouan Shearwater (Puffinus yelkouan) and not a Manx' Shearwater (Puffinus puffinus) this time... Storm-Petrels were spotted from about four miles onwards - single ones of both species (as far as possible to call them while passing by fast...) and later also small groups - several times of 5 to 10, some of them swimming and then resembling somewhat a flock of Phalaropes... We also came across one or two Great Skuas (Stercorarius skua).
At about 10 a.m. we started chumming and within a few minutes, the first Storm-Petrels showed up near the boat, European Storm Petrels (Hydrobates pelagicus) in the beginning, but soon also Wilson's Storm Petrels (Oceanites oceanicus) and then more and more came... 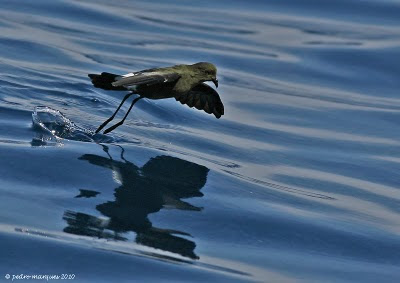 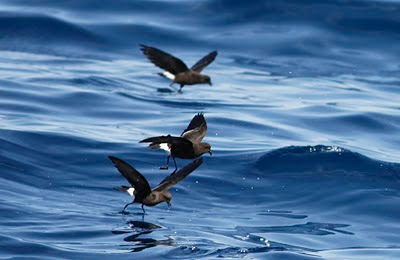 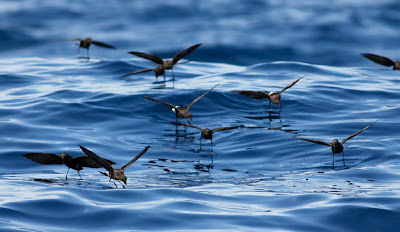 We had at least 40 to 50 Storm Petrels (of both species together) around the boat during an almost 2 hours chumming session. I have been to a Wilson's Storm Petrel as close as two meters (!) when it came to investigate where all the good smell came from (was me, entirely covered in nice fishy chum ;-). Up to 24 Wilson's were feeding in a flock, resembling big butterflies, when "dancing" upon the water and touching it with their yellow-webbed feet, while picking small food-particles from the surface... These are the situations, when they also call, but this can only be heard with a special equipment. Including the birds we came across along the way, we have seen about 45 to 55 Wilson's Storm Petrels and around 40 to 50 European Storm Petrels during this trip. The following trip-list is based on António Gonçalves' (who just photographed a Brown Bobby at Portugal's west-coast by the way!) estimates from the (roughly 7 hours) trip: 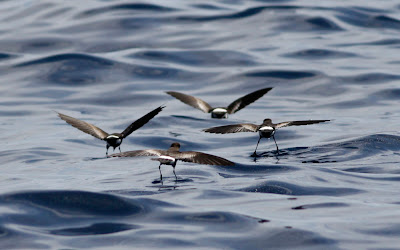 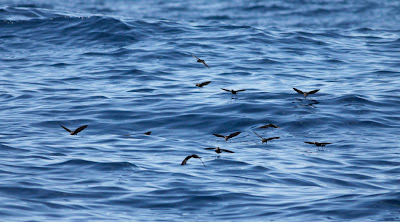 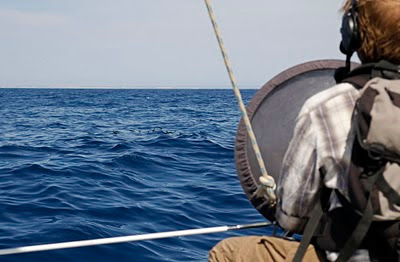 Many thanks to Daniel Machado and Inês from Ecoceanus for an excellent job with the boat and to all who have joined in. 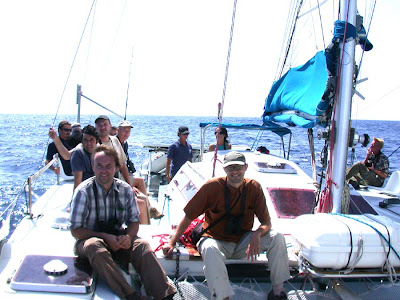 On the way back. Magnus Robb and Luis Godinho in the front, Pim Wolf to the right. Thanks, Pim and Pedro, for sharing your brilliant shots with me (and you) !!! 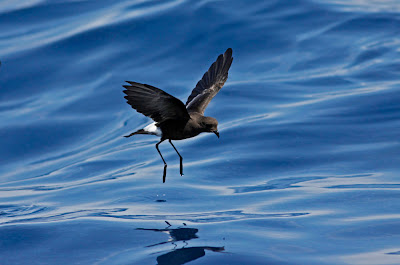 I'd love to repeat a trip like this with Ecoceanus - we only need a group of people to go out (price depending on group-size from 50 € onwards). October is an excellent month for pelagics here, and chances for Great- and more Sooty Shearwaters are even higher. Please note also the trips I am organizing together with Passeios Ria Formosa and visit my website here.
Posted by Georg at 12:02 PM No comments:

Eleonora´s Falcons near the cape 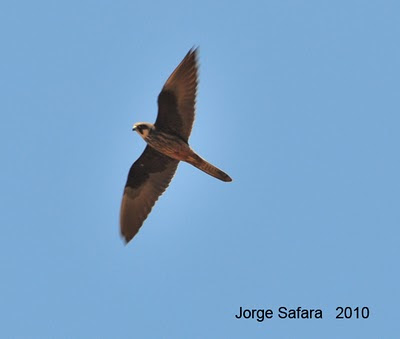 
Birdwatching around the cape of Sagres and São Vicente - the extreme south western point of continental Europe - is always a great thing to do, particularly when migration peaks here in late summer and autumn. On good days, 15 to 20 raptor species can be seen, of a total of 31 bird of prey species recorded here so far. In late August, still at the beginning of the season, Lesser Kestrel, European Roller, White-rumped Swift, Egyptian Vulture, Bonelli's Eagle (I saw 4 different Individuals), Honey Buzzard and Eleonora's Falcon have been seen already. Seawatching from the cape, around 30 Great Skuas, 120 Cory's Shearwater, a dozen or so Balearic Shearwaters and around 10 Grey Phalaropes could be seen during less than an hour on the 31st of August.
Though the Eleonora's Falcons are not known to breed in the area, they show up every year and there are records throughout the season from August to October. It's interesting, because this period is the (delayed) breeding season for this cliff-nesting (often colonial) Falcon, feeding the young with migratory passerines, while dragonflies are the main food during the rest of the year. Main wintering area for the species is east Africa (Madagascar).
I have seen 2 different birds here in late August (of a total of 3 Ind.) - both of the pale morph, an adult and a probable immature, most probably the birds on the photos made by Jorge Safara (Obrigado para partilhar, Jorge !) and included in this article. Latest news - a sighting of a Lanner Falco biarmicus by Simon Wates on the 4th of September, a species that I have seen with a group of people here in February 2007 - record shots are here (scroll down). 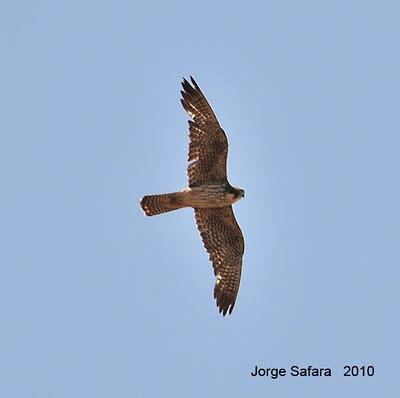 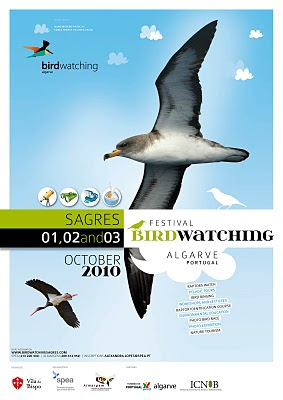 The Portuguese Birdlife-Partner SPEA has been organizing events in the cape-area of Sagres over the past years already, always on the first weekend in October. This year, on the 1st to the 3rd of october it's going to be bigger ! I remember fantastic days there with hundreds of birds of prey (not "pray"...) in the air and 15 species of raptors through out the day or more. The area offers a spectacular marine bird life as well - you can do both in one day ! I have been seeing Egyptian Vulture and Eleonoras Falcons there this August already but migration is going to peak there in about 4 weeks...
I will be participating and offering field-activities.

This Manx Shearwater (Puffinus puffinus) has been seen during a boat trip off Fuzeta (east Algarve) with Passeios Ria Formosa on the 13th of August. I love this photo ! Note the missing toe-projection in comparison to P. yelkouan. 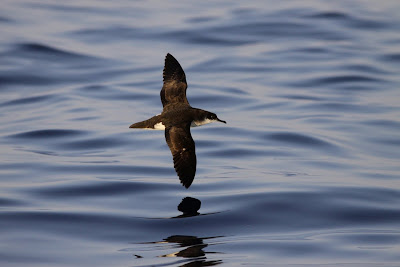 The next boat-trips (Pelagics) are scheduled for the 11th (Fuzeta) and 12th (Portimão) September ! There are still a few seats available !
Posted by Georg at 9:33 AM No comments: