Now summer definitly arrived and drought takes place where ever you look. June is the month of fledgeing young and juvenile dispersion. According to this, a Black-shouldered Kite (Elanus caeruleus) hangs arround the roadcrossing of the N 125 towards the airport just north of Faro a lot. Many juvenile Iberian Yellow Wagtails (Motacilla flava iberiae) can be seen in Ria Formosa and other salt marsh habitat along the coast. I saw juvenile Grey Wagtails as well today, at a reservoir near Ribeiro de Alamo, few km west of the Castro Marim reserve. Besides Great- and Common Reed Warbler, also Golden Oriole (Oriolus oriolus) was present. I observed a male attacking (!) a Fereal Pigeon, wich flew by, intending to drink, and chasing it away. I guess he was overdoing a bit in defending his territory, but who knows, never trust domestic animals...The Red-necked Nightjars, wich I can sometimes hear at night when I leave the window open, or see just after sunset, hunting for insects near some Pine trees, wich I am looking at, when I step out of my front door, are silent at the time. Probably incubating. But the Little Owls, inhabiting a nearby ruin, are noisy as most of the year. Now matter wich side of the sandy track leading to the house I take - there are Bee-eaters perched on the telegraph wire along the track.Last Wednesday I went into the eastern Algarve Serra, the secondary valleys west of the Guadiana river, in particular. The purpose was to get White-rumped Swift (Apus caffer) wich is a very scarce breeder in the area, as well as to see Western Rufous-tailed Scrub Robin (Cercotrichas galactotes) wich is not uncommon along the streams in the area.I did not go alone. Pedro Marques, a Portuguese photographer based in Lisbon, and perhaps one of the best wildlife photographers in the country, accompanied me. To cut a long story short, this has been a succsessfull trip ! You can see some of the results below. Pedro later told me, he went to visit the site again the next day, and was surprised to see a couple of Black Storks (Cigonia nigra) including one bird flying about 3m above his head...! We also had good views of Blue Rock Thrush (Monticola solitarius) - carrying food, as well as a rather pale Short-toed Eagle (Circaetus gallicus)hovering and passerines like Thekla Lark, Rock Bunting, Subalpine Warbler, Craig Martin and Red-rumped Swallow. Remarkable also, that Common Sandpiper, Little-ringed Plover and Water Rail apparently all breed at this site. The wonderfull
photos at the following post - the best I have seen so far from this species actually, are clickable to enlarge.
Posted by Georg at 1:02 AM No comments: 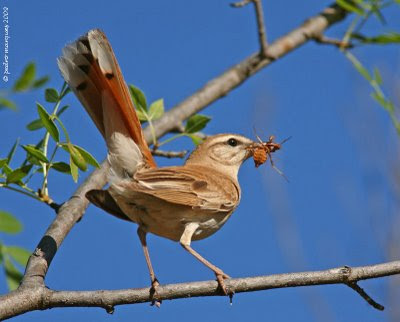 Western Rufous-tailed Scrub-Robin (Cercotrichas galactotes) Algarve, June 2009. This and the following photos are made by Pedro Marques. 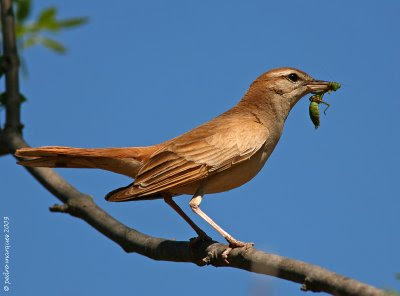 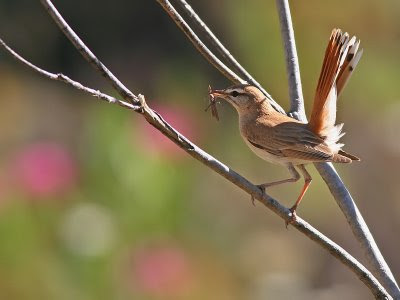 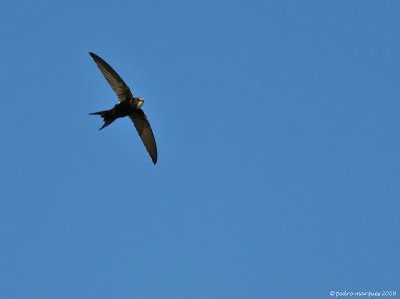