Another rarity has been found in the Cape-area near Sagres today - a juvenile White-rumped Sandpiper Calidris fuscicollis at the small lagoon at Praia de Martinhal. When I arrived at the late afternoon, the light was getting low already I did not get a good photo. Anyway, this has been one of the biggest twitches I have seen here so far - with more than 15 people showing up at the location during the afternoon. The bird was very tame and did not bother photographers crawling closer than 10m. 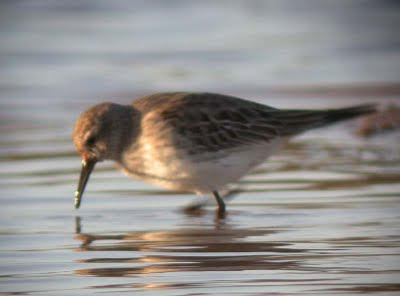 Note the extremly longish body-shape and the primaries extending well beyond the tail as well as bill-length compared to Little Stint, for instance. 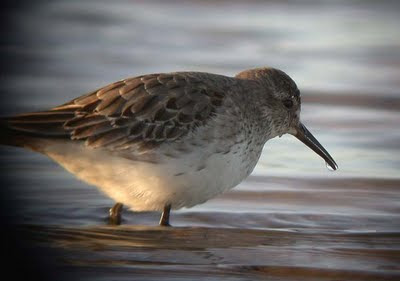 The brownish base of the lower mandible is an important feature to seperate the species from Baird's Sandpiper, wich could be the confusion species. Brownish cap and greyish neck indicating a juvenile bird. The bird is moulting into first winter plumage of course, but some chestnut-brown scapulars are still retained and the edges of most of the tertials are not showing this colour tone anymore but have been replaced by the white edged ones of the first-winter plumage. 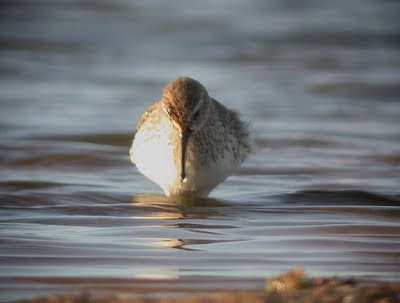 The body shape seen from the front would be broader on Baird's Sandpiper. 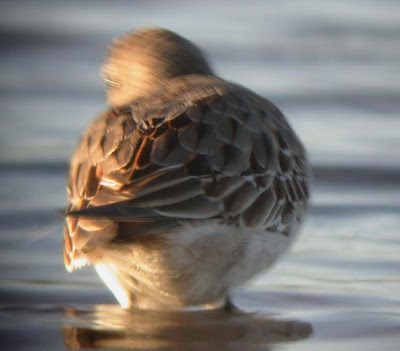 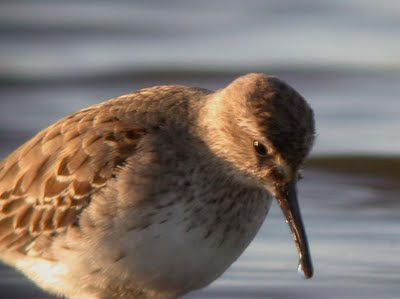 When a walker in a signal-yellow jogging-dress passed close by the waters edge on the opposite side of the very small lagoon, the bird showed a behaviour wich I have never seen any wader doing - it pressed itself down to the water-level and stretched out as much as possible, to hide from the approaching, potential threat. It was then holding this position for about 20 seconds or so ! Only coming out, when the danger had passed away. Amazing. It reminded me on a bevaviour, Little Grebes show in similar situations, when they hide themselves in the water, in an in-between position, between swimming and diving, and stay there, with only their head and a part of the neck above the water level. 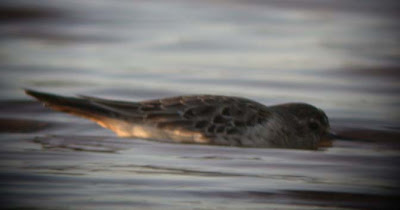 Note again how longish the bird is !
Posted by Georg at 8:06 PM 2 comments: 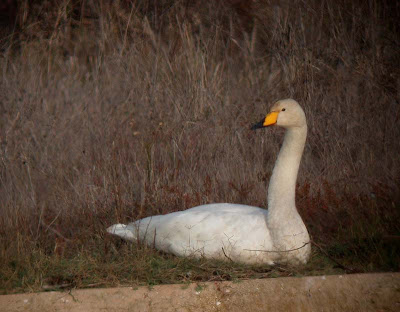 Another surprise - a Whooper Swan Cygnus cygnus has been found by Carlos Vilhena at the tank of Altura in the eastern Algarve yesterday. I went to see the bird in the afternoon. It was roosting next to the tank and I got the impression, that it was very exhausted. I could not see its legs, but others did and the bird is not ringed. It really looks like a wild bird to me ! Would be the second record for Portugal. I know that Whooper Swans sometimes join flocks of Common Cranes Grus grus on migration, of wich big numbers are wintering each year in the South of Portugal (inland) and Spain, like in Doñana, Andalusia. Lots of birds are already there. The yellow-brownish colour tone on the birds neck and head might come from pigments in the water it has been feeding in (Iron-Oxid or similar) but could also indicate that it is a second year bird. However, I miss the reference to clearify this at the moment. Bill colour defenitly excludes a 1st Winter bird. Its often young birds wich tend to "exaggerate" their passage and end up far beyond the actual wintering distribution of the species. In this case this would be the northern parts of central Europe, with the big lakes at the northern margin of the Alp mountains as the southern limit.
You can check a map of the wintering distribution of the species in Germany here, and in the UK here.
Its remarkable that 8 Whooper Swans (of how many in total ?)have been reported flying westwards on the north-western Tip of Galicia a week ago. And many northern Ducks and Geese has been reported. These Ind. could have reached the Algarve in the meanwhile. Here is the original note from www.rarebirdspain.net
Whooper Swan Cygnus cygnus (1-8)
(1-8) A Coruña Eight birds were seen flying W from O Barqueiro, A Coruña on 13.11 (Ricardo Hevia)
Altura-reservoir actually is an rather ugly concrete-tank that does not look very attractive to waterbirds one should say, but it is filled with a Makro-Algae and therefore does attract many Common Coots (and Red-Crested Coot occasionaly) wich also feed on this plants, like Gadwalls and Swans...
Posted by Georg at 6:12 PM No comments: