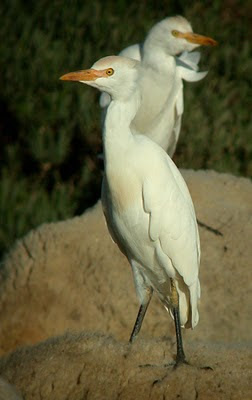 Cattle Egrets (Bubulcus ibis) "surfing" on a sheep's back. 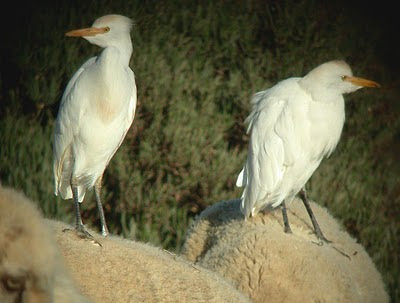 They come to catch insects and small vertrebrates flushed by the flock. Why not using the comfortable "mobile post" right in the middle ?

"Summer time..." - yes, even the fishes are jumping. It's nice and warm, but not too hot to go out for birding !

A Day Tour yesterday produced a pretty long list of good birds. At 7.00 we went up into the "steppes" of the interior south of Portugal, where we started our Birding with observations of Lesser Kestrel, European Roller, Great- and Little Bustard, Collared Pratincole, Great Spotted Cuckoo, Black-bellied Sandgrouse and Montagu's Harrier... Later in the morning, when it became warmer, we searched and found Vultures - and a lot. We had some seen soaring in thermal and found later that they were feeding nearby on the ground. More and more came and we observed around 80 Griffon Vultures and a single Black-Vulture around this place. Booted Eagle, Rufous-Bush Robin, Kingfisher, Black-eared Wheatear and a lot of Bee-eaters during the morning were also most welcome.
After lunch, we returned to the coast, were temperatures are still moderate (perhaps also we had seen most of the birds we came for). At a sweet water marsh with reed beds we observed Purple Swamphen, Purple Heron and Black-crowned Night Heron among others. A first adult Mediterranean Gull (Larus melanocephalus) in full breeding plumage was also remarkable. Many chicks of aquatic birds were present. Black-headed Weavers at their nests and a couple of Ferruginous Ducks (Aythya nyroca) finaly made this a successful birdwatching Trip.
On another Tour earlier this week, Eagle Owl (Bufo bufo) and White-rumped Swift (Apus caffer) - a couple, were among the highlights.
Posted by Georg at 1:25 PM