On the two Tours, today (27th) and yesterday, we saw some super birds !

A group of Wilson's Storm Petrels (Oceanites oceanicus) feeding right next to the boat of Passeios de Ria Formosa a few miles out Fuzeta (east Algarve). It was fascinating to observe how they were literally "walking on the water" and hovering to catch small food particles at the surface.
We encountered a school of well 20 or 30 Common Dolphins (Delphinus delphis) and watched their joyful movements and jumps. Northern Gannets, Cory's- and Balearic Shearwater as well two juvenile Black Terns (Chlidonias niger) about 4 miles out were other seabirds we saw during this trip. Really looking forward to more trips out to the sea and hoping to be able to bring some photos the next time. Season has only begun !

The plains of the Alentejo (interior south Portugal) were hot today. But that was expectable. After observing Booted- and Short-toed Eagles we saw around 50 Griffon Vultures soaring and then spotted a dull dark-brown Vulture, legging the obvious contrast between black-flight feathers and the buff-brown wing-coverts, but smaller than Eurasian Black Vulture, with a different jizz and not as blackish. The contrasting white bar in the underwing (lesser coverts) could be seen. It also turned in smaller circles with slightly quicker movements than the somewhat bigger Griffon. Rüppell's Vulture (Gyps rueppellii). Because of moult in the wing feathers it was most probably a previous years bird.
Dick Forsman wrote an article about Rüppell's Vulture in Spain (Birding World, 2005). A second Vulture among all the Griffons we saw showed characteristics of or an adult Rüppell's of the subspecies "erlangeri" or an African White-backed Vulture (Gyps africanus) a species, that has been reported in 2006 in South Portugal, as you can see here. Our bird, soaring quite high, gave the impression of an adult Aegyptian Vulture in the first moment to both observers, because of the "black and white"-contrast between remiges and coverts/body plumage, but it was clear that it was an Vulture of the "Griffon-type".... it went quickly out of range and I could not be sure about the ID, hoping to see this bird again in the next days.
Great Bustard, European Roller, Lesser Kestrel, Montagu's Harrier, Short-toed- and Calandra Larks have been other birds we saw in the "steppes". Earlier, we had observed White-rumped Swifts (Apus caffer) - one bird surprisingly found next to the castle of Mertola ! 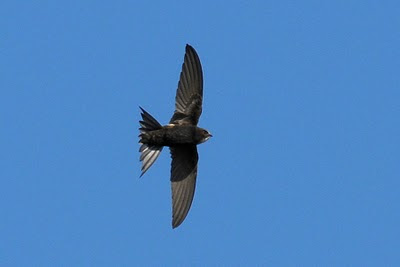 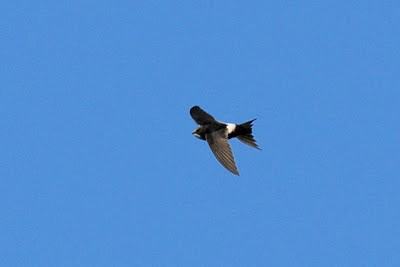 In the Algarvian Serra we saw Golden Oriole, Rufous Bush-Robin, Dartford- and Subalpine Warbler, Long-tailed Tits and in a mixed feeding flock of Warblers and Tits, we heard (song!) Bonelli's Warbler. Collared Pratincoles and Lesser Kestrels have abandoned their nest sites already and also Bee-eaters are on dispersion - migration has started.
25 Slender-billed Gulls (Larus genei) on the 13th and a Caspian Tern (Sterna caspia) and a Red Kite (Milvus milvus) on the 6th of July (all Castro Marim -area) have been other observations (or dates) of interest. 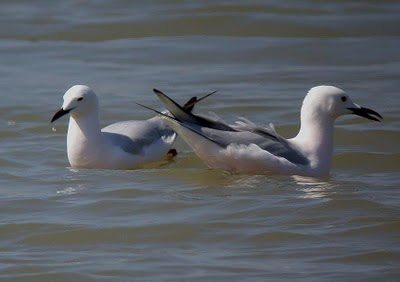