Surf Scoter in the Central Algarve !

Today I received a phone call from a friend and experienced Birder and Ringer here in the Algarve, saying that he found a Velvet Scoter on the sea just out a small lagoon between Quinta do Lago and Quarteira (Praia das Dunas Douradas). I was quite busy with other stuff at the moment and actually decided I would not go, though I had never seen this species in Portugal, but knew it well from Germany. Few minutes later the phone ringed again:"Its a Surf Scoter Melanitta perspicillata !" Now that was more convincing and 5 Min later I was in the car. Just before arriving I received the message that the birds (the bird was found in a group of 14 juvenile Common Scoters Melanitta nigra) had just left. We met at a nearby beach few km's east an could relocate the flock - but before we could aproach it, the birds flew again and moved back to the first place ! There, we finaly came close enough to see them well (its a juvenile) and make some record digiscoping-shots of the bird, before they moved on again.... A super-rarity in Portugal, most European records are made in Ireland. (Observers: João Ministro, Miguel Mendes, Georg Schreier) 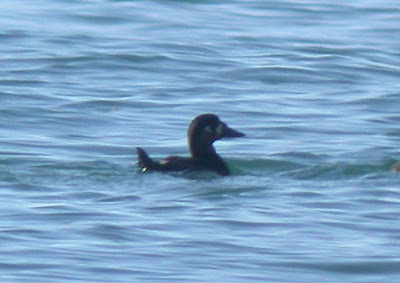 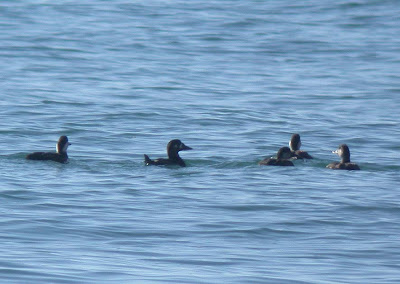