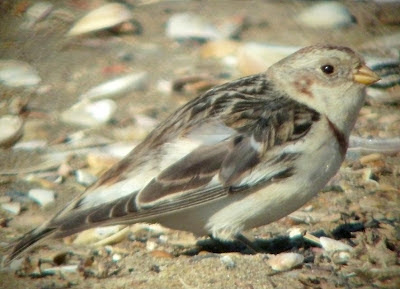 This male Snow Bunting (Plectrophenax nivalis) was filmed at the beach of Vila Real do St. Antonio (Algarve) on the 08/02/2012. It was feeding together with a female in the zone, where the beach meets the pre-dunes, right next to the river-mouth of the Guadiana and pretty confident.
Originally three birds had been discovered at the site in December already. The species nests in the tundra-zone from north Scandinavia on northwards and eastwards and is normally rather a rare winter visitor to Portugal's west coast.

You may want to click on the YouTube-symbol in the right lower corner of the video, to watch it in a larger format and listen to calls at around 0:38


Interesting was also the observation of at least 13 Little Terns (Sterna albifrons) at this time of the year, foraging in the mixing waters of the Guadiana river-mouth. The species is actually strictly an Africa-migrant, but here, some stay during all winter. Possibly the only place in all Europe.
Both, Razorbill (Alca torda) and Great Skua (Stercorarius skua) could be seen entering the river, too.
We found Slender-billed Gulls (Larus genei) in Tavira (in the saltpans on the way to Hotel Vila Galé Albacora) as well as in the saltpans near Fuseta (3 Individuals at each site) the same day, as well as a Black-winged Kite (Elanus caeruleus) perched next to an orchard at the N 125 near Luz de Tavira at the end of the day.

A Crested Coot (Fulica cristata) was yesterday still present here in "Ludo" (Faro-area) just east of the so called "São Lourenço-bridge".
Posted by Georg at 10:13 PM