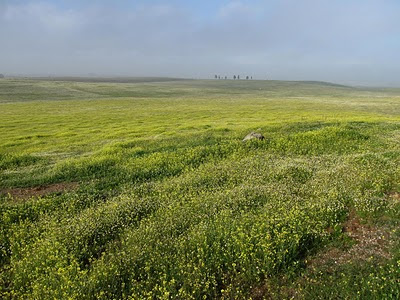 Springtime here in South Portugal begins just after Christmas, is what I usually say and it is true. Serins (Serinus serinus) and Spotless Starlings (Sturnus unicolor) are singing outside, and the first Bees and Butterflies are visiting the flowering meadows. In the Alentejo, the vast inland open Oak woods and grasslands of South Portugal, Calandra Larks (Melanocorypha calandra) and Corn Buntings (Milaria calandra)are singing, while the fields are full of Golden Plovers (Pluvialis apricaria) and Lapwings (Vanellus vanellus) and Red Kites (Milvus milvus) are circling above the scenery, to name but a few common species. 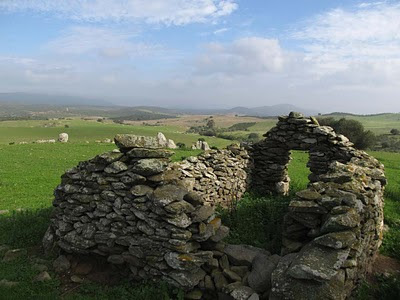 Yesterday, observations of a Spanish Imperial Eagle (immature) close together with an adult Bonelli's Eagle, have been among the highlights of the trip. But also well a dozen Black-bellied Sandgrouse (Pterocles orientalis) in total gave good views. Spring has only begun, and the Alentejo will be full of flowers until around mid May. In the next weeks, the first migratory birds, like the Great Spotted Cuckoo (Clamator glandarius) will arrive here, while such elusive bird species as the Rufous Bush Robin (Cercotrichas galactotes), European Roller (Coracias garrulus) and White-rumped Swift (Apus caffer) will only come back from tropical Africa around mid April or even in May. 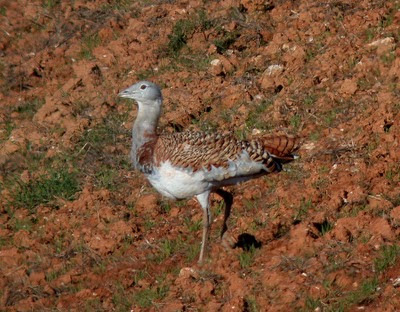 The Great Bustard (Otis tarda) is the emblematic bird of the Baixo Alentejo grasslands. Thanks to the successful conservation programs run by the Portuguese NGO "Liga para a proteçaõ da Natureza" (LPN) in the area, this magnificent birds and other "steppe" birds are increasing again but distribution is very local.

Some people call the area the Paradise in Portugal and it is a fantastic place for birdwatching without any doubt, recently ranked on 37 of the best Birdwatching destinations worldwide by the American Birding Association (ABA) here: http://blog.aba.org/2010/12/2010-top-40-the-birding-year-in-review-part-1.html#tp I met the author, Ted Floyd, on the Birdwatching Festival in Sagres in October 2009, when I was guiding a group of journalists and tour operators on behalf of the Algarve eco tourism company Sunquays. The event had been organized by the Tourism board of the Algarve.
Posted by Georg at 12:13 PM