Wishing everybody a good year 2011 - healthy, happy, successful, prosperous and full of good birdwatching, of course !

Today has been an incredibly sunny day here around Faro, with temperatures close to 20 degree C and hardly any wind. The birds of prey liked it - Common Buzzards (Buteo buteo) performed display flights, "miauing" high above the Umbrella Pines and I counted a total of six Booted Eagles (Aquila pennata) in the area. Three Black-winged Kites (Elanus caeruleus) were also present.
In the afternoon, another Black-winged Kite was feeding on his catch on a telegraph post near Vilamoura, a couple of Marsh Harriers (Circus aeruginosus) was hunting nearby. Flocks of Spanish Sparrows (Passer hispaniolensis), lots of Corn Buntings (Milaria calandra) and a mixed flock of Lapwings (Vanellus vanellus) and Golden Plovers (Pluvialis apricaria) roosted on an acre. 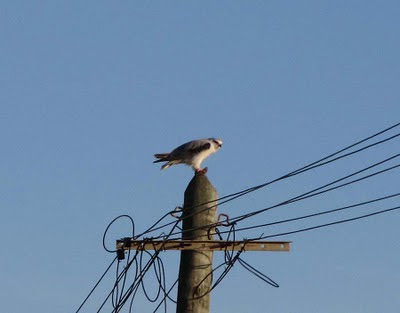 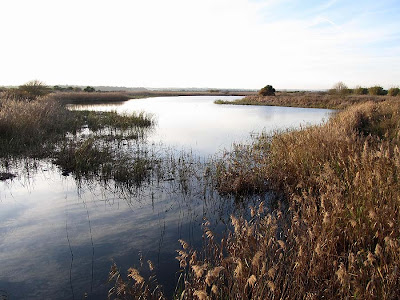 In the Marina of Quarteira, an adult Greater Black-backed Gull (Larus marinus) was easy to find, sitting on his favourite boat-Cabin again. I observed this bird there a month ago already, and probably the same Ind. the previous winter. An Irish Birder visiting the Algarve from time to time - we have been runing into each other already years ago, in Ludo, where he had just found a Baird's Sandpiper (Calidris bairdii), photographed another, ringed adult there recently. He also made a great capture of a flock of Common Scoter (Melanitta nigra) just before I arrived near the Marina with a Birding group, also seeing these birds. 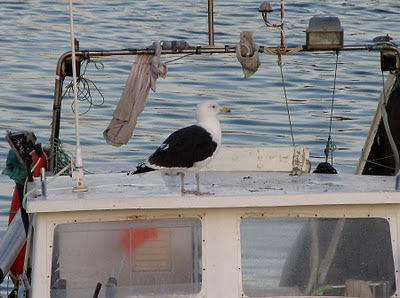 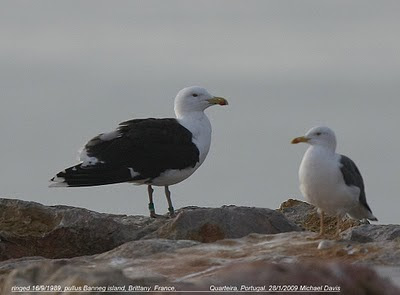 Flock of 47 Common Scoter (Melanitta nigra), Quarteira, 2009-12-11. Photo: Michael Davies. There is just one adult male in the whole flock. Click on the picture to enlarge. Thank's Michael for sharing - a great shot, I really like it, it remembers me on one of the best observations during that afternoon !

Yesterday I observed an adult male Little Bittern (Ixobrychus minutus) close to the observatory at the São Lourenço Golf-Course, a Glossy Ibis (Plegadis falcinellus) was foraging close by, next to the ever present Azur-winged Magpies (Cyanopica cooki).
An apparently adult female Goosander (Mergus merganser) currently present at the Alvor-estuary (near Lagoa, west Algarve) is the first record of this species for the Algarve and not the only one in Portugal and Spain at the moment. Not a must for us being used to see these birds wintering further north but definitely a good Algarve tick.
Posted by Georg at 7:49 PM