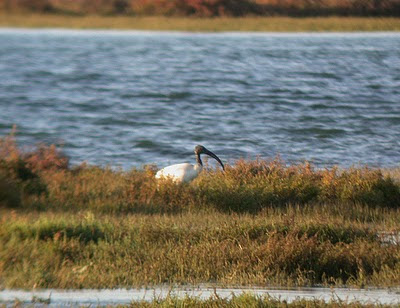 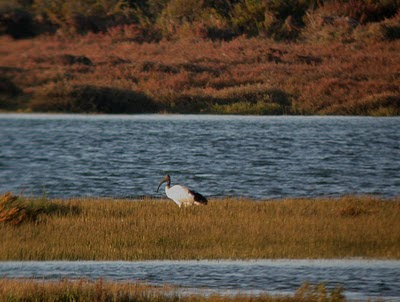 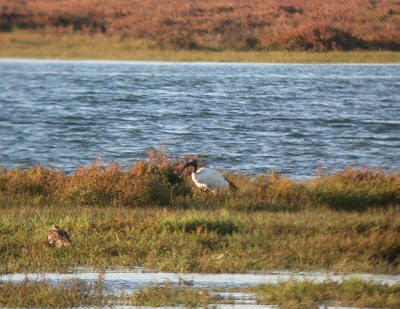 Photographed this Sacred Ibis (Threskiornis aethiopicus) in the Ria Formosa Natural Park near Faro-beach today.
Several sightings of at least 2 Individuals of this "Exotic" bird have been made in central-Algarve wetlands over the past weeks. The species, originally from Sub-Saharian Africa, has formed colonies in several European countries, which are based on Zoo-escapes. Neozoa are a global issue of our time and not a big deal in most cases, but this one is one of the few species with some "conflict potential", because it has been found to be able to do big harm to other nesting aquatic birds up to the complete elimination of whole seabird-colonies by killing the young and eating up the eggs. This excellent article here Yésou, P. & Clergeau, P. 2005 Sacred Ibis: a new invasive species in Europe. Birding World 18 (12): 517-526. is based on the experiences in France and gives all the details, including many photos and plates. Note the hint regarding the negative experiences with the species (on Page 525) which has lead to a "culling" project in France.
Regarding the situation in Portugal, it says on page 520: "(...) three Sacred Ibises found near Coimbra, Portugal, in early 1998 were thought possibly to have bred in the area, as the group increased to six by the end of the year; they disappeared thereafter (Gonçalo Elias pers. comm.)."
So, definitely a nice bird, should feel free to visit here all the time, but please don't nest here (or disappear thereafter !)
Posted by Georg at 10:42 PM