Early yesterday morning I drove to the West-coast, to do some field-work for an impact-study near Aljezur. Around midday, I spent two hours at on raptor-watchpoint, where I had god views of an dark morph Booted Eagle (Aquila pennata) and a pair of Short-toed Eagles (Circaetus gallicus) circling above the farmland and the surrounding hills. Well a dozen Crag Martins (Ptyonoprogne rupestris) were catching insects in the air and the surrounding bushes were filled with European Robins. Around 2 o´clock, after I watched a thermal with 10 soaring White Storks, I saw this distant, huge thermal... and as suspected, they were Griffon Vultures (Gyps vulvus) and there were a lot. I then noticed more of these huge thermals further north, while in the south already birds began to glide straight in southern direction. In between the thermals, birds flew from one to the other and further below, single birds split from the large groups and seem to explore the hills on their own. All of them must have been terribly starving, because there is never enough food for this numbers of Vultures in our cleaned up environment. Feeding might just be enough to "keep" the majority of them "going". I counted/estimated a total of around 900 Ind. in at least 5 big groups which I could see simultaneously. Unfortunately the flocks were too far to discover other species in them, which normally is the case and both, the Eurasian Black Vulture (Aegypius monachus) and the African Rüppell's Vulture (Gyps rueppellii) follow the migrating Griffon Vulture-flocks.
Exhausted Vultures are collected every autumn along the Algarve and brought to the recovery-centre (RIAS) in Olhão, where they get help. If you are in South Portugal and find an injured or weakened Vulture or other bird or wild animal, you can bring it to this rehabilitation-center, the contact of RIAS is Tlm.: 927659313, e-mail: rias.aldeia@gmail.com - you can visit their blog here: http://rias-aldeia.blogspot.com/ They are specialized in wild animals and sometimes local vets don´t know what to do in such a case... If you can not catch the animal yourself, you can call the police for the protection of the environment SEPNA (GNR) Portimão, or T.: 808 200 520 in urgent cases (also forest fire etc.) for the whole country (sos ambiente e território) – , which will do the job and deliver the animal. Many thanks to Thjis Valkenburg for sharing this information. 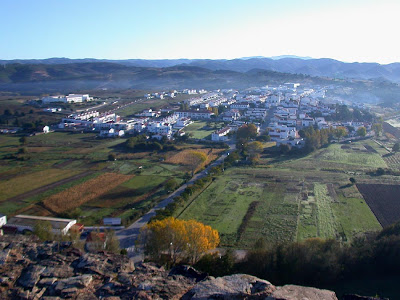 Looking east from Aljezur, towards the Monchique-mountains.

On Thursday I have been guiding a party of 3 people around Vilamoura, where, when we were still in the car and before we reached our actual first stop, one of them spotted a circling raptor nearby above a golf course. It was a single Griffon Vultures soaring at about 40m above the green ! The huge bird approached us (we had pulled in at the road side) and finally almost flew over, giving great views (I am looking forward to some photos ;-)
We found the Penduline Tits we were looking for, but they did not show themselves, calling nicely on 3 different spots, but we did not see a single one this day ! Watervowl was easier, and a (distant) White-headed Duck (Oxyura leucocephala) and at least two Ferruginous Ducks (Aythya nyroca) were good encounters. Other birds of prey included Booted Eagle (pale morph), Black-winged Kite (Elanus caeruleus) and a couple of Marsh Harriers. We finished the afternoon with observations of Bluethroats (Luscinia svecica) and waders near Faro. 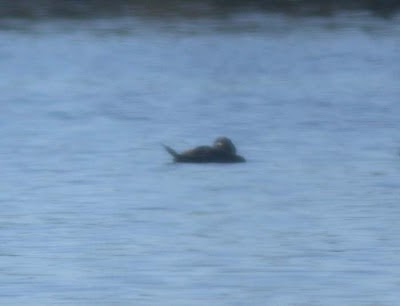 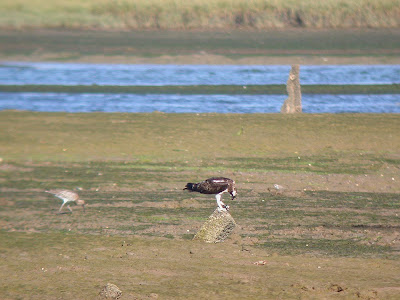 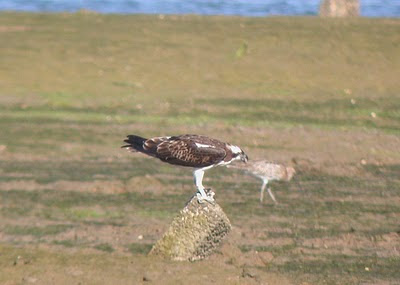 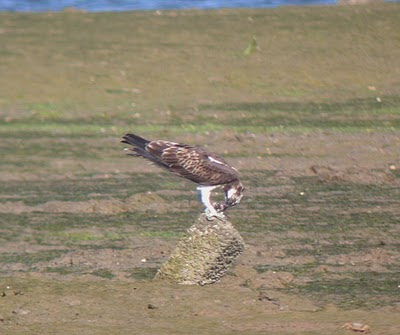 This morning I observed this juvenile Osprey (Pandion haliaetus) in Ria Formosa near Faro-beach, feeding on his catch.

Just recalling now, that a quick visit at Salgados-lagoon yesterday (04-11-2010) produced two late Whiskered Terns (Chlidonias hybridus) and at least five first winter Little Gulls (Larus minutus) among many other birds in the area.
Posted by Georg at 8:44 PM