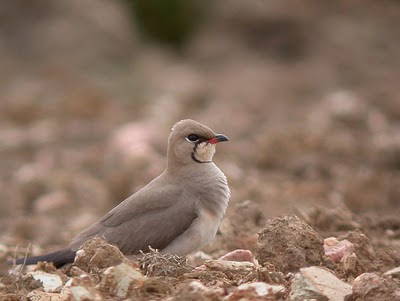 Collared Pratincole (Glareola pratincola) photographed during a Tour in the Alentejo this Friday.

We were walking on a farm track near a small reservoir and surrounded by about 25 of the Pratincoles, flying around us, landing on the acre close to us or hunting for insects above the meadows and among the cattle and sheep, calling and performing with elegance in the air, like giant Swallows. Well a dozen of Bee-eaters were using the same area and perching on nearby fence-posts, a Southern Grey-Shrike and several Short-toed and Thekla Larks were around, when a dark Booted Eagle (Aquila pennata) approached the scenery circling low above us - a very dark bird, a marvelous sighting - and flushed every bird in the area, causing quite a panic among them.
We also found Hoppoe, Raven, Little Ringed-Plover, Black-winged Stilt and Little Egret at this place. Other species, earlier this day, had been Rufous-tailed Bush Robin (Cercotrichas galactotes) - my first one for this year, Golden Oriole, Black-eared Wheatear and Dartford Warbler (all Eastern Algarve), Montagu's Harrier, Black-shouldered Kite, Griffon Vulture, European Roller, Little Bustard, Great Bustard, Stone Curlew, Calandra Lark, Spanish Sparrow and Alpine Swift.
Posted by Georg at 1:00 AM