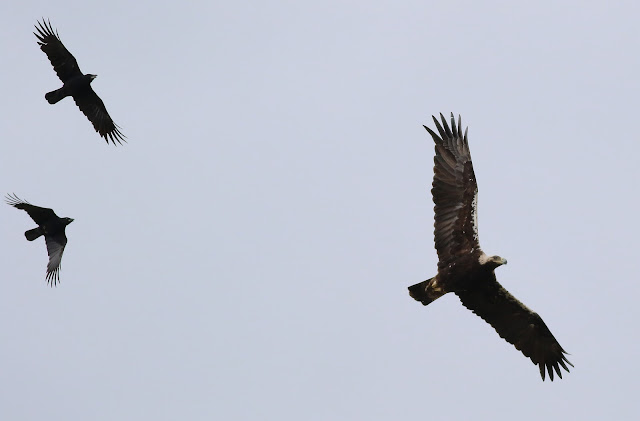 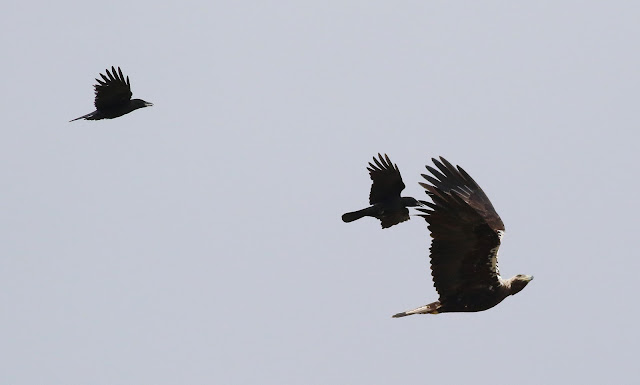 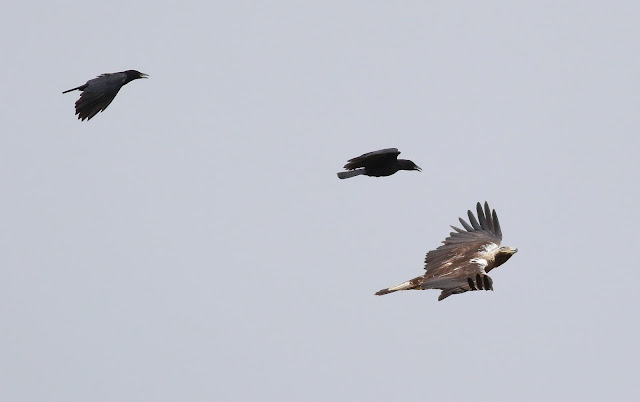 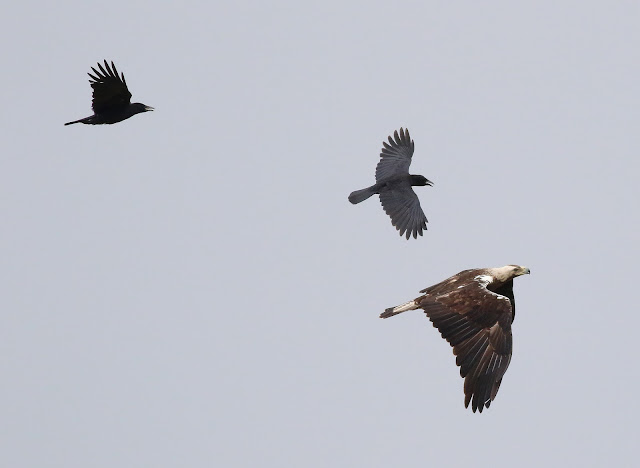 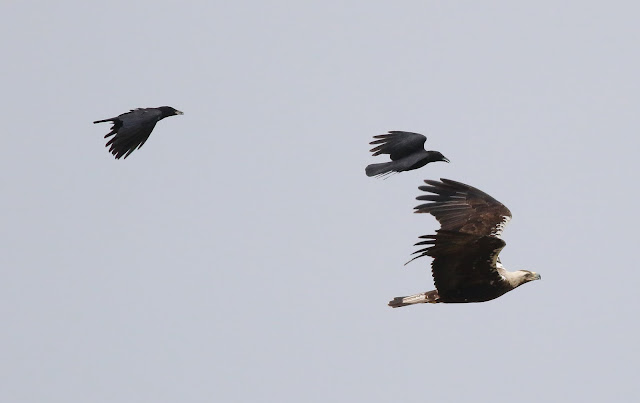 There are these moments in your life as a naturalist or birdwatcher, that you will never forget. Often unexpected, you suddenly become a witness of Nature's great beauty and impressive force and you can only go like: "Wow!" . Watching a full adult Spanish Imperial Eagle flying towards you and then passing us by at a distance of less than 50 meters absolutely falls into this category. A moment like this you can not plan, but since there are now 15 breeding pairs of this species in south and east Portugal again, it is a species we see with regularity and it can be a target species for a day tour to the interior south Portugal, even though it s still hard to guarantee observations and one should not expect to see it as close as this. The Iberian Imperial Eagle (as it should actually be rightfully called) nested in 2003 for the first time in Portugal again, after for decades no breeding record had been obtained. Most pairs choose to settle in large private hunting estates, as these properties are closed to the public and a high population of prey (most importantly rabbits) exists. Population pressure from the increasing population of neighbouring Spain, based on a successful conservation program there, surely played an important role in its return to Portugal as a breeding species. The young Portuguese conservation program "Life Imperial" still faces a lot of difficulties, but the increase to the now 15 pairs in 2017 and 2018 makes it already a success story.
Useful and interesting information on the species and its conservation in Portugal (also in English) can be found here: http://lifeimperial.lpn.pt/en
I wrote a six pages article for the April 2018 - edition of Germany's leading bird magazine "Der Falke" on the bird life of Portugal's Baixo Alentejo-region, highlighting also the return of Iberias "King of birds" to Portugal as a breeding bird: https://www.falke-journal.de/der-falke-42018/

Yesterday, 18.06.2018, I saw a Little Swift (Apus affinis) near Cape S. Vincent, the Algarve's western cape ! It was feeding in an area, where also a good gathering of the local breeding Pallid Swifts (Apus pallidus) and Alpine Swifts (T. melba) took place. This species nests in Morocco and there are some small colonies near the Strait of Gibraltar in Spain (Chipiona-harbor, f. i.) but not in Portugal, as far as known and is a rare vagrant with less than one observation per year. Over the last week alone however, five observations in different locations in the west Algarve (including also Foia/Monchique and the Alvor estuary had been made, three of which by a single observer, suggesting that we have an influx of this species in the Algarve right now. I tried my luck yesterday and managed to find one! For me a new bird for Portugal and species number 334 for the Algarve-region. Ironically I only recently watched this species in South Morocco, during a great 8-days birding trip in late March/ early April this year, into the high Atlas mountains and the Sahara desert. If you plan on this (and I can only say its worth while) you should contact http://www.gayuin.com/ who organized an unforgettable and very successful day trip for the desert specialities for us from Merzouga. I took tons of photos and might post some of them here on this blog later.

Regarding rarities in the Algarve, there is a good network of observers here and we exchange information. I created a facebook-page for this purpose only, which you can join here when looked into your own facebook account: Rare Birds Algarve
A good number of rarities I found myself this last winter and spring, including a Sociable Lapwing at Lagoa dos Salgados in November (later seen by many as it stood there till March) a 1st winter Caspian Gull, Lesser Yellowlegs, two different Pectoral Sandpipers, another (now anual) Yellow-browed Warbler and a Spotted Sandpiper in March at the Ria Formosa in Olhão, which stood there until early May, when it was in full breeding plumage. Quite a looker! See for yourself ...

Finally - I highly recommend you join a Pelagic boat-trip to see Shearwaters, Skuas, Storm Petrels and others (often also Dolphins) off the Algarve coast ! Its one of the best things to do during the hot summer months...
All information is on my website here: http://www.birdwatching-algarve.com/pelagic-boat-trips.html
The next scheduled trips are for July, 12th;  July, 21st (Saturday) and July, 31st so far (Fuzeta), other dates on request !
Some more trip reports of pelagics are here on this blog: here, here, here and here.
Hoping to see you soon !