Summer has arrived here in South Portugal, providing the weather conditions for two species that do like it "hot": The White-rumped Swift and the Rufous Bush Robin, a.k.a.: (Western) Rufous-tailed Scrub Robin.
While widespread over equatorial Africa, the White-rumped Swift (WRS) in Europe is confined to areas in the south of the Iberian Peninsula, where it is rather rare, showing a slighly positive trend though since its colonisation beginning in the 1960s at the Strait of Gibraltar. In Portugal it is found in the arid and hot south-east and east of the country only. From the east Algarve hinterland (Serra do Caldeirão), along the Guadiana river-valley and its affluents inland, to areas around Mértola, Beja and Moura (Alentejo) with the Tejo-valley, near Castelo Branco marking the northern limit of its breeding territory in the country (corresponding to the northern limit of the distribution in Spain). Nest sites are often road bridges along small secondary roads over a river bed. Here the species takes over a nest of the common Red-rumped Swallows (Cecropis daurica) around mid May. Most of the few known breeding sites are occupied year after year. Recently, new nest sites have been discovered. The first breeding record for Portugal dates from 1995. Out of the usual breeding range in the country was a pair nesting in Monchique-area (West-Algarve) a few years ago. It correspondes with observations of the species made near Cape S. Vincent in late August. The total breeding population for the country might be in the order of 10-20 pairs, however, exact numbers do not exist. After the young have fletched, the birds beginn to disperse. I remember having observed WRS's in August on a regular basis feeding above a small reservoir in Alcoutim-county (east-Algarve), before a nearby (c. 10kms) nest site had been discovered. My latest observation date for the species are two Ind. seen over the salt pans of Castro Marim-reserve on the 15th of September, on the way to their wintering grounds in sub-saharan Africa. 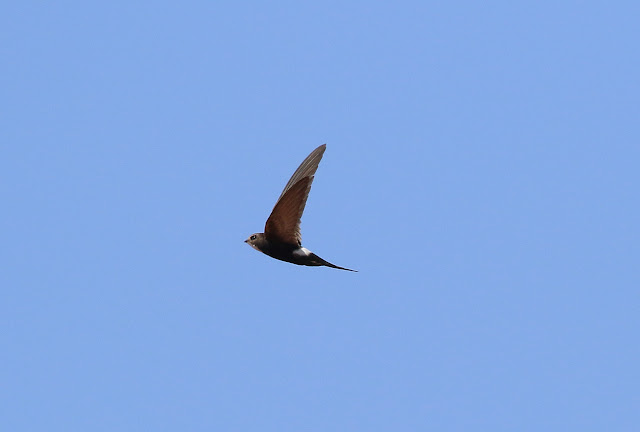 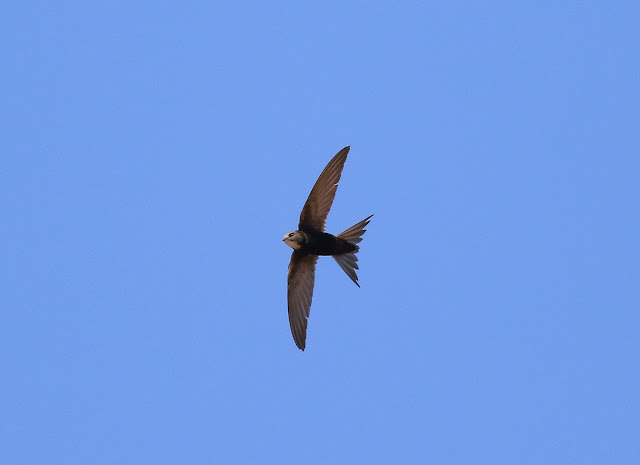 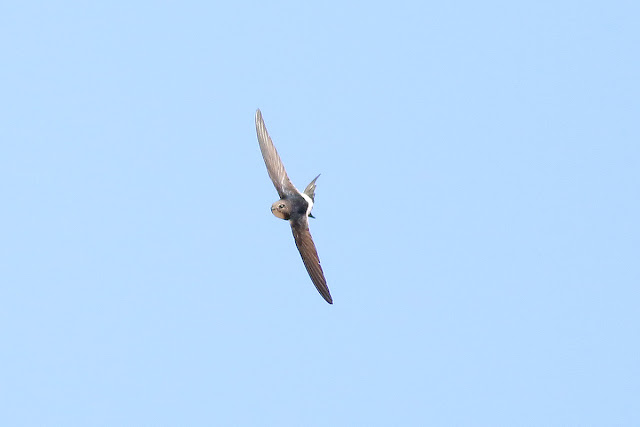 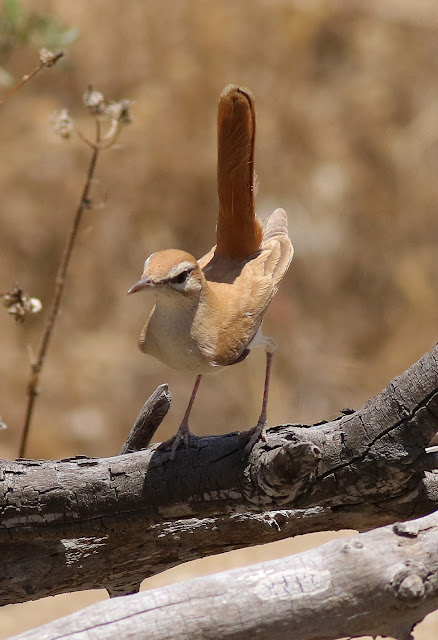 Most birds are less active around mid day- the Rufous Bush Robin however, sings throughout the hottest hours. Again, confined to Portugal's south east and arriving hardly any earlier than the first half of May, it breeds in small numbers along streams in the "pseudo-steppes"of the Baixo-Alentejo plains and the region around the Guadiana-river valley, as well as in the eastern Serra do Caldeirão (Algarve). Territorys occasionally found further west in the Algarve, in the surroundings of Lagoa do Salgados (Silves) and near Paderne, for instance, are thought to be caused by birds forced away from their usual breeding grounds at the Alqueva-reservoir, where the species has lost lots of habitat, when Europe's biggest reservoir was built (around the year 2000). Rocky river beds, in hot and dry areas, best with some cliff faces and the pink-flowering Oleander-bushes (Nerium oleander), are good areas to look for this species. Fruit orchards and gardens also make part of its habitat, essential is the access to water. The birds of South Iberia differ from those found in south-eastern Europe (Greece and Turkey, mainly). The latter, usually treated as a subspecies ("syriacus"), shows a greyish color tone over the head, neck, mantle, back and in the wing, while "our" western birds (subspecies "galactotes") are more uniformly rufous- or buff-orange colored. The species is rarely seen on migration, but there are records from the Cape-area near Sagres (September) and ringing-records made near Faro-airport, for instance. Impressive is the territorial display, shown in the pictures below, including fanning the magnificent tail and dropping the wings. 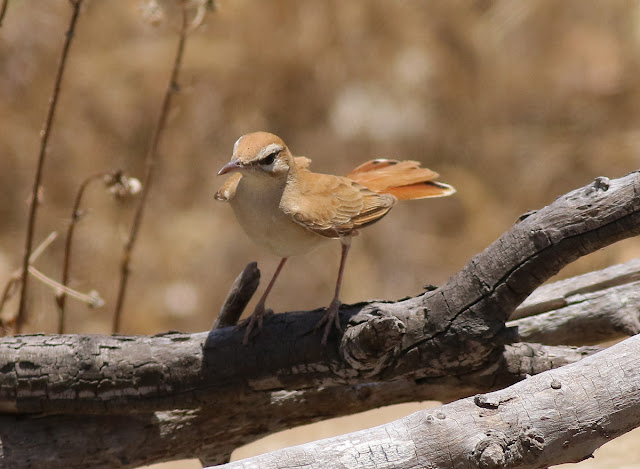 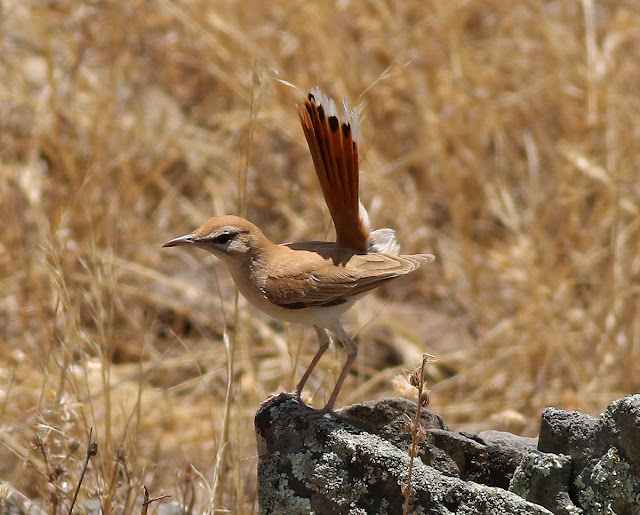 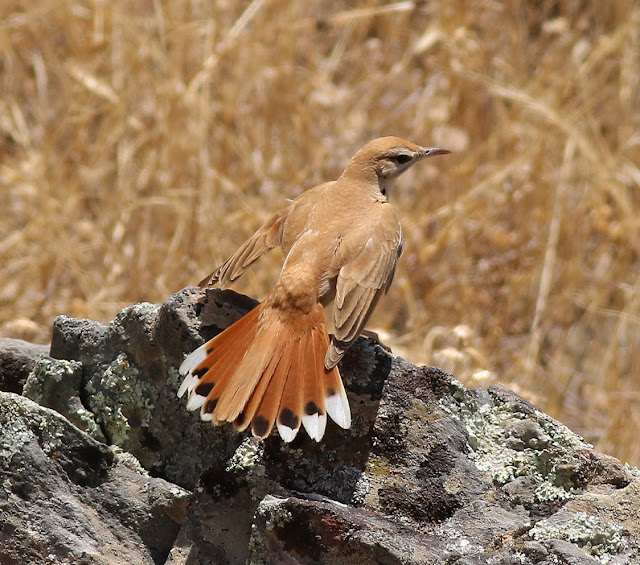 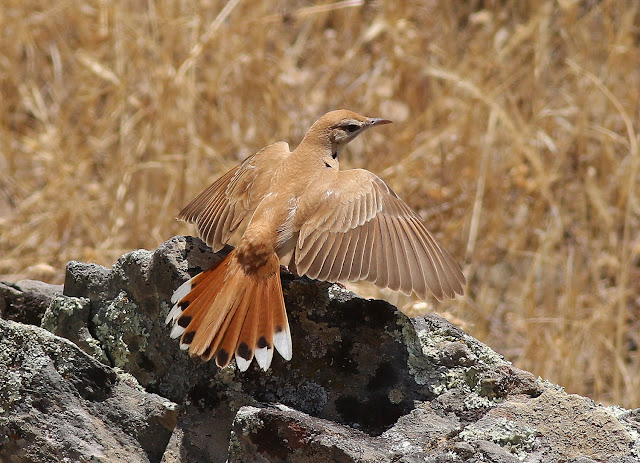