On August, 3rd the subsequent song of a Western Bonelli's Warbler (Phylloscopus bonelli) heard when arriving in "Ludo" near Faro, for a morning tour with a German family, marked the beginning of autumn migration to me this year. The Warblers stayed for some days and three weeks later, some days ago, Bonelli's Warblers were still stopping over in the hinterland of the cape area of Sagres, in the western Algarve. 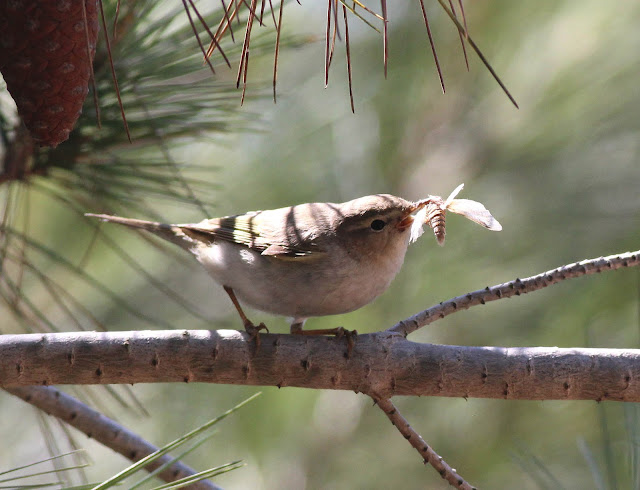 Of course some sort of migration, "up" north- or "down" south is going on at almost every day in the year. In June, sometimes as early as the 10th of June, the first Black-tailed Godwits and Green Sandpipers show up here in the Algarve, coming straight down from their nesting grounds in Scandinavia and around the north sea, where they start- (and therefore also finish-) breeding quite early in the year. At the same time the very last Greater Ringed Plovers or Bar-tailed Godwits stop over in the lagoon system of the Ria Formosa Natural Park still on their way north...
June is also the month of the fledged juveniles here and shortly after, from July onwards, the local summer birds, like Bee-eaters and Sylvian Warblers start to disperse over the countryside and gather up around sites with higher food availability, often next to wetlands, since particularly the interior from mid summer onwards suffers from a draught and food shortage as a consequence. By mid August, neither European Rollers nor Collared Pratincoles could be found in the Baixo Alentejo plain anymore since this summer was particularly hot. However, Great- and Little Bustards, Black-bellied Sandgrouse, Sp. Imperial- and Golden Eagle and many others could be observed on a tour on August, 12th. Also Black-eared Wheatears and Calandra Larks, as well as some Lesser Kestrels and Montagu's Harriers could still be seen.
Monday, 17th this week, a European Roller stopping over at Lagoa dos Salgados (Silves) was a nice surprise. Collared Pratincoles bred again at the site this year. For the second year now, since the earthworks at the site, creating a dam to hold back part of the water when the lagoon is drained and the construction of artificial islands for the nesting of birds, were finished. The investment done of around 1 Million € at this site is probably unique in the Algarve. The final results remain still to be seen. At the moment, the site has lost attractivity to waders in particular, because of both, a too high water level and the replacement of soft mudflats for hard soil banks. Vegetation on the islands will grow high quickly, too, having perhaps the positive effect of the possibility of a Egret/Heron colony forming in Tamarisc bushes.
On the next day, Tuesday, 18th, a White-rumped Swift (Apus caffer) gave still good views at a small lagoon near Alcoutim (Algarve). Short-toed- and Thekla Larks, Black-eared Wheatear and Black Vultures were also seen that day, when Short-toed Eagles and Booted Eagles were crossing the country side and Bee-eaters seemed to be perched on almost every telegraph wire in the area.
In Sagres, two days ago, 2 juvenile Egyptian Vultures (Neophron percnopterus) gave close views and a thermal of 28 Black Kites (Milvus migrans) was typical for the date, since the species is known to peak early in the season. Many Woodchat Shrikes were on the move already, mainly juveniles and a 2nd cy male Montagu's Harrier puzzled us a bit, because it had pretty much the "jizz" of a Hen Harrier, appearing unusual heavy build and broad winged for the species. Little Bustards and a Tawny Pipit were among the local breeding birds we saw. Yesterday evening, 12 Stone Curlews were on a stubble field east of Faro, plus a Willow- and a Melodius Warbler in the same area.

My year list for continental South Portugal (south of Lisbon) is on 245 species at the moment.
Bubo.org