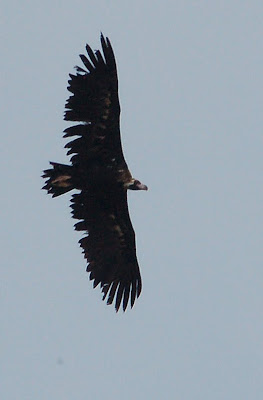 Among the impressive variety of raptors occurring in South Portugal, Eurasian Black Vulture (or: Cinerous Vulture) Aegypius monachus is one of the most impressive representatives. Normally seen accompanied by Griffon Vultures (Gyps fulvus) these "dark giants" scan the vast, steppe-like plain for carcasses. With a wingspan of up to 2,90 m, they are considered the biggest soaring birds in this part of the world. Their dark overall-appearance, lacking the strong contrast between black remiges and sandy-colored coverts, like in Griffon Vulture, soaring on flat wings and showing a "fingered, hanging hand", makes them unmistakable. 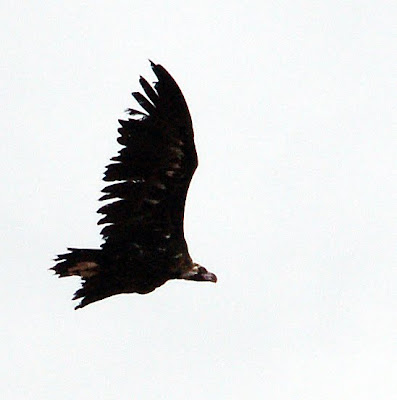 Eurasian Black Vulture (Aegypius monachus).
Baixo Alentejo, 29-04-2011. Photo: Craig Wright. The same Ind. as above. (Many thanks to Craig for sharing these photos!)

The majority of the European population nests in Spain (about 1100 pairs), mainly in the Extremadura, but there is a reintroduction-program running in the Alentejo, which has good chances to succeed, due to the positive population-trend in the Iberian Peninsula. Other than Griffons, they nest preferably in trees, solitary- or in loose colonies and are very sensitive regarding disturbances in the nest area. We observe Black Vultures from spring to autumn in the "steppes" of South Portugal - up to 6 different Individuals together during April and early May 2011. Most of them were young immatures. During autumn migration, the species is also seen in the Algarve, particularly the Sagres-Peninsula (October/November), when the big Vulture-flocks (up to 1000 or more Ind./day!) pass through the area on their way to Africa. 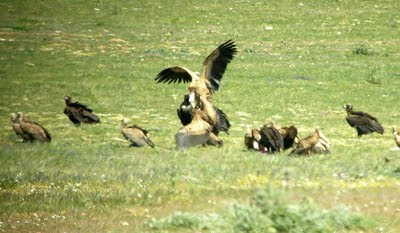 Griffon Vultures (Gyps vulvus) and Black Vultures (Aegypius monachus) feeding on a carcass. Alentejo, Portugal, 18-04-2011. Photo: GS.- digiscoped at a distance of around 200 m.
Posted by Georg at 9:50 PM