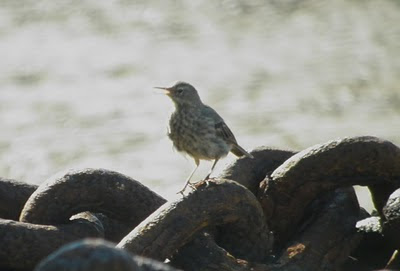 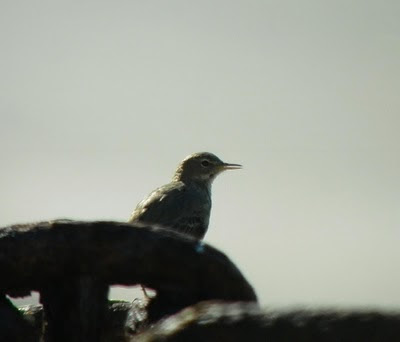 Rock Pipit (Anthus petrosus) in the harbor of Sagres today (05-Feb. 2011). A Rock Pipit (this one?) had been reported from this location some weeks ago. Not an easy one to distinguish from Water Pipit (A. spinoletta) in some cases. Both species were formerly seen together as the "Water Pipit-complex". This individual is rather untypical on the first look, a bird of the "Scandinavian" subspecies littoralis. Note the very long bill, the short supercillium, which does not continue behind the eye, dark-grey mantle and the dull underparts, which are diffuse and heavily streaked. I could not see the outer tail feathers. But most of all I found that the call was loud and sharp (accentuated) and sounded clearly different to the weaker and diffuser call of Water Pipit or anything I have ever heard from the latter species. An interesting article about the former "Water Pipit-complex" is here http://www.ntbc.org.uk/water and rock pipits.html - scroll down to the end of the page to see some similar Rock Pipits to this one here. Today, two Rock Pipits have been reported from Sagres harbor (and a Purple Sandpiper Calidris maritima, a species that I have found there with a Birdwatching-group this past December) - the photo I saw of the Rock Pipit today, showed a different, more typical Individual (all dull and dark). Yesterday, a Slavonian Grebe (Podiceps auritus) has been found and photographed in Ria Formosa just south of Faro, but I could not find the bird there this morning and it seems it has passed on. It is a species I have never seen in Portugal so far. There is also still a Goosander(Mergus merganser) present in the Alvor-estuary near Alvor. Just no Waxwings so far... :) but there has been a record in the 1960s in Portugal !
Posted by Georg at 11:41 PM